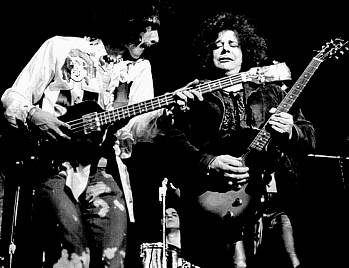 
Mountain is an American rock band that formed in Long Island, New York in 1969. Originally comprising vocalist and guitarist Leslie West, bassist/vocalist Felix Pappalardi, keyboardist Steve Knight and drummer N. D. Smart, the band broke up in 1972 and has reunited frequently since 1973, remaining active today. Best known for the song "Mississippi Queen", Mountain is one of many bands to be commonly credited as having influenced the development of heavy metal music in the 1970s

In early 1969 Leslie West, formerly of the Long Island R&B band The Vagrants, put together a band, Leslie West Mountain (a reference to West's one-time physical bulk), with Norman Landsberg (keyboards, bass) and Ken Janick (drums) and began playing concerts. Right around this time, former Cream collaborator Felix Pappalardi expressed an interest in producing an album of Leslie's. The resulting record, Leslie West Mountain, featured Landsberg and former Remains drummer N.D. Smart. The album spotlighted West's raw vocals and melodic, bluesy guitar style, and Pappalardi's heavy and elegant bass lines were prominent throughout and according to West when Pappalardi asked what would be next, West suggested the pair go on the road. The group was heavily inspired by seminal British blues-rock band Cream (with which Pappalardi had been a frequent collaborator: he produced Disraeli Gears, Goodbye and Wheels of Fire, also contributing viola, brass, bells and organ to the latter) and also comprised keyboardist Steve Knight, who was added after Landsberg left to form another group, Hammer, with Janick . Naming themselves after West's album, West, Pappalardi, Smart, and Knight played shows on the West Coast before getting to play their fourth concert as a working band at the 1969 Woodstock Festival in Bethel, New York.

Mountain was received enthusiastically by the festival audience but the band did not appear in the film of the event, nor was their performance included on volume 1 of the festival's live album. Their performances of "Blood of the Sun" (from West's album) and "Theme for an Imaginary Western" (a song they planned to record for Climbing and co-written by former Cream bassist Jack Bruce) did appear on the second volume of Woodstock performances.
Raed more....