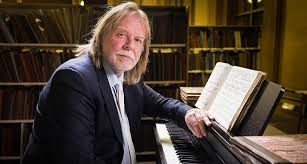 
Richard Christopher "Rick" Wakeman (born 18 May 1949) is an English keyboardist, songwriter, television and radio presenter, author, and actor. He is best known for being in the progressive rock band Yes across five tenures between 1971 and 2004 and for his solo albums released in the 1970s. Born and raised in West London, Wakeman intended on being a concert pianist but quit his studies at the Royal College of Music in 1969 to become a full time session musician. His early sessions included playing on "Space Oddity", among others, for David Bowie and songs by Junior's Eyes, T. Rex, Elton John, and Cat Stevens. Wakeman became a member of Strawbs in 1970 before joining Yes a year later, becoming part of the band's "classic" line-up and playing on some of their most successful and influential albums across two stints until 1980. Wakeman began a solo career during this time, in 1973; his most successful albums are his first three: The Six Wives of Henry VIII, Journey to the Centre of the Earth, and The Myths and Legends of King Arthur and the Knights of the Round Table. He formed his rock band, The English Rock Ensemble, in 1974 which he continues to perform with. Wakeman pursued solo projects throughout the 1980s that varied in levels of success; his most successful album was 1984, released in 1981, which was followed by his minor pop hit single, "Glory Boys", from Silent Nights, in 1985. He hosted the television show Gastank, and produced the first of many New-age and ambient albums. In 1988, he co-formed Anderson Bruford Wakeman Howe which led to his third Yes stint until 1992. He returned twice more between 1995 and 2004, during which he completed several more solo projects and tours, including venturing into Christian music. Wakeman continues to perform concerts worldwide in various capacities. Wakeman's discography includes over 90 solo albums[1] that range from several musical styles. He has made many television and radio appearances; in recent years he became known for his contributions to the BBC comedy series Grumpy Old Men and his radio show on Planet Rock that aired from 2005 to 2010. Wakeman has written three books; an autobiography and two memoirs. Wakeman was born in the west London suburb of Perivale. The only child of Cyril Frank Wakeman and Mildred Helen Wakeman the three lived in Wood End Gardens in nearby Northolt. Cyril played the piano in a dance band while he was in the army and worked at a building suppliers, joining as an office boy at fourteen to become one of its board of directors. Mildred worked at a removal firm. In 1954, Wakeman began at Wood End Infants School in Greenford followed by Drayton Manor Park Grammar School in Hanwell in 1959.When Wakeman turned seven, his father paid for weekly piano lessons with Dorothy Symes which lasted for eleven years. She recalled that Wakeman "passed everything with a distinction" and was an "enjoyable pupil to teach, full of fun and with a good sense of humour", but noted his lack of self-discipline when it came to practicing Symes entered Wakeman in many music competitions around London who went on to win many awards, certificates, and cups. In his teenage years Wakeman attended church and learned the church organ, became a Sunday school teacher, and chose to be baptised at eighteen Wakeman described himself at school as "a horror ... I worked hard in the first year, then eased up". During his time at Drayton Manor school Wakeman played in his first band, the trad jazz outfit Brother Wakeman and the Clergymen. He also formed Curdled Milk, a joke on "Fresh Cream" by Cream, to play at the annual school dance. The band were unpaid after Wakeman lost control of his car and drove across the headmaster's rose garden at the front of the school, thereby forfeiting their performance fee to pay for the damage. At fourteen Wakeman joined the Atlantic Blues, a local blues group that secured a year's residency at a mental health rehabilitation club in Neasden.In 1966, he joined the Concordes, later known as the Concorde Quartet, playing dance and pop songs at local events with his cousin Alan on saxophone and clarinet. Wakeman used the money earned from their gigs to buy a Pianet, his first electronic instrument.[8] In 1967, Wakeman began a tenure with the Ronnie Smith Band, a dance group based at the Top Rank ballroom in Watford. There he met singer Ashley Holt, who later sang on many of Wakeman's future albums and tours. In 1968, Wakeman secured a place at the Royal College of Music in London, studying the piano, clarinet, orchestration, and modern music, with the intention of becoming a concert pianist. To enter he needed to pass eight music exams to earn his A-levels, which required him, as his mother remembered, "to do two years' work in ten months". Wakeman put in the effort following a ten shilling bet with his music teacher who believed he would not succeed, and refusing his father's offer to work with him. Wakeman joined the Royal College on a performers course before a change to the teachers course, but quickly found out that "everyone else there was at least as good as me; and a lot of them much better." He adopted a more relaxed attitude to his studies, spending much of his time drinking in pubs and with the staff at the Musical Bargain Centre, a music shop in Ealing.[16] Wakeman's first booking as a session musician, and his first time in a recording studio, occurred when guitarist Chas Cronk entered the shop one morning in need of an organist and brass arranger for members of the Ike & Tina Turner band. During the session Wakeman met producers Tony Visconti, Gus Dudgeon, and Denny Cordell, who was impressed with his performance and offered him more session work for artists at Regal Zonophone Records, which Wakeman accepted and began skipping college in favour of sessions.
Publicado por la musica del segle passat en 12:38