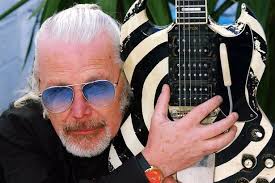 Roger "Deke" Leonard (18 December 1944 – 31 January 2017) was a Welsh rock musician, "serving a life sentence in the music business". Best known as a member of the progressive rock band Man, which he joined and left several times, and for fronting his own rock and roll band Iceberg, which he formed and disbanded several times, he was also an author, raconteur and television panellist. Leonard was born in Llanelli, South Wales. He formed his first band, Lucifer and the Corncrackers, with Mike Rees (vocals), Geoff Griffiths (drums) and Clive "Wes" Reynolds (bass), in 1962, whilst still at Llanelli Grammar School, taking his stage name from "Deke" Rivers, the character played by Elvis Presley in his second film Loving You . Leonard left school to work for a building contractor, which he left to avoid being fired, so became a full-time musician. The Corncrackers ran their own club, the "L" Club, featuring themselves and other local musicians, whilst also playing support to acts such as Johnny Kidd & The Pirates and The Hollies at a rival venue. When Rees left they continued as a trio; Keith Hodge then replaced Griffiths, but when Reynolds left to join the South Wales band The Jets, The Corncrackers broke up. Leonard also joined The Jets, on keyboards, but preferred playing guitar, so reformed The Corncrackers with additional guitarist Brian Breeze, before replacing Vic Oakley as bass player in The Blackjacks, with whom he toured US bases in Europe. On his return, he rejoined The Jets, with Tony "Plum" Hollis on vocals, Martin Ace (bass) and Beau Adams (drums). There were other bands named The Jets on the circuit, so they changed their name to The Smokeless Zone and took residencies in Germany, including one at Hamburg's Top Ten Club where Tony Sheridan played with them. Adams was replaced by Terry Williams, but after more European residencies, they disbanded. When Breeze left the Corncrackers, Leonard rejoined, playing London residences and recording demos for EMI & CBS. When Hodge left, Terry Williams joined on drums and Martin Ace as a multi-instrumentalist. The band changed its style to psychedelia and its name to Dream; not sure what a "freak-out" was, they invented their own with shaving foam and confetti.In November 1968, Leonard joined The Bystanders, to replace Vic Oakley (again), just as the band changed their musical direction, from close harmony pop to a psychedelic/American west coast style, and their name to Man.
Extraido de wikipedia
Publicado por la musica del segle passat en 19:24