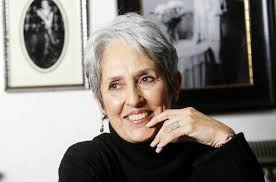 Joan Chandos Baez (born January 9, 1941) is an American folk singer, songwriter, musician, and activist whose contemporary folk music often includes songs of protest or social justice. Baez has performed publicly for over 55 years, releasing over 30 albums. Fluent in Spanish and English, she has recorded songs in at least six other languages. She is regarded as a folk singer, although her music has diversified since the counterculture days of the 1960s and now encompasses everything from folk rock and pop to country and gospel music. Although a songwriter herself, Baez generally interprets other composers' work, having recorded songs by the Allman Brothers Band, the Beatles, Jackson Browne, Leonard Cohen, Woody Guthrie, Violeta Parra, The Rolling Stones, Pete Seeger, Paul Simon, Stevie Wonder, Bob Dylan and many others. In recent years, she has found success interpreting songs of modern songwriters such as Ryan Adams, Josh Ritter, Steve Earle and Natalie Merchant. Her recordings include many topical songs and material dealing with social issues. She began her recording career in 1960 and achieved immediate success. Her first three albums, Joan Baez, Joan Baez, Vol. 2, and Joan Baez in Concert all achieved gold record status and stayed on the Billboard and other record album charts for two years. Songs of acclaim include "Diamonds & Rust" and covers of Phil Ochs's "There but for Fortune" and The Band's "The Night They Drove Old Dixie Down". She is also known for "Farewell, Angelina", "Love Is Just a Four-Letter Word", "Forever Young","Joe Hill", "Sweet Sir Galahad" and "We Shall Overcome". She was one of the first major artists to record the songs of Bob Dylan in the early 1960s; Baez was already an internationally celebrated artist and did much to popularize his early songwriting efforts. Baez also performed three songs at the 1969 Woodstock Festival and has displayed a lifelong commitment to political and social activism in the fields of nonviolence, civil rights, human rights and the environment.Baez will be inducted into the Rock and Roll Hall of Fame on April 7, 2017.
Publicado por la musica del segle passat en 17:57 No hay comentarios: 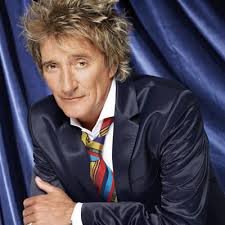 Sir Roderick David "Rod" Stewart, CBE (born 10 January 1945) is a British rock singer and songwriter. Born and raised in London, he is of Scottish and English ancestry. Stewart is one of the best-selling music artists of all time, having sold over 100 million records worldwide. He has had six consecutive number one albums in the UK and his tally of 62 UK hit singles includes 31 that reached the top ten, six of which gained the #1 position.[3] Stewart has had 16 top ten singles in the US, with four reaching #1 on the Billboard Hot 100. He was knighted in the 2016 Birthday Honours for services to music and charity. With his distinctive raspy singing voice, Stewart came to prominence in the late 1960s and the early 1970s with The Jeff Beck Group, and then with Faces, though his music career had begun in 1962 when he took up busking with a harmonica. In October 1963, he joined the Dimensions as a harmonica player and part-time vocalist. In 1964, Stewart joined Long John Baldry and the All Stars, and in August, Stewart signed a solo contract, releasing his first single, "Good Morning Little Schoolgirl", in October. He maintained a solo career alongside a group career, releasing his debut solo album, An Old Raincoat Won't Ever Let You Down in 1969. Stewart's early albums were a fusion of rock, folk music, soul music, and R&B. From the late 1970s through the 1990s, Stewart's music often took on a new wave or soft rock/middle-of-the-road quality, and in the early 2000s, he released a series of successful albums interpreting the Great American Songbook. In 2008, Billboard magazine ranked him the 17th most successful artist on the "Billboard Hot 100 All-Time Top Artists". A Grammy and Brit Award recipient, he was voted at #33 in Q Magazine's list of the Top 100 Greatest Singers of all time, and #59 on Rolling Stone 100 Greatest Singers of all time.[9] As a solo artist, Stewart was inducted into the US Rock and Roll Hall of Fame in 1994, the UK Music Hall of Fame in 2006, and was inducted a second time into the US Rock and Roll Hall of Fame in 2012 as a member of Faces.
Publicado por la musica del segle passat en 17:50 No hay comentarios: 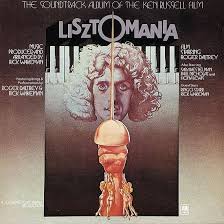 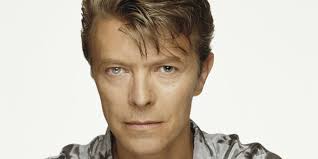 David Robert Jones (8 January 1947 – 10 January 2016), known professionally as David Bowie  was an English singer, songwriter and actor. He was a figure in popular music for over five decades, regarded by critics and musicians as an innovator, particularly for his work in the 1970s. His career was marked by reinvention and visual presentation, his music and stagecraft significantly influencing popular music. During his lifetime, his record sales, estimated at 140 million worldwide, made him one of the world's best-selling music artists. In the UK, he was awarded nine platinum album certifications, eleven gold and eight silver, releasing eleven number-one albums. In the US, he received five platinum and seven gold certifications. He was inducted into the Rock and Roll Hall of Fame in 1996. Born and raised in Brixton, South London, Bowie developed an interest in music as a child, eventually studying art, music and design before embarking on a professional career as a musician in 1963. "Space Oddity" became his first top-five entry on the UK Singles Chart after its release in July 1969. After a period of experimentation, he re-emerged in 1972 during the glam rock era with his flamboyant and androgynous alter ego Ziggy Stardust. The character was spearheaded by the success of his single "Starman" and album The Rise and Fall of Ziggy Stardust and the Spiders from Mars, which won him widespread popularity. In 1975, Bowie's style shifted radically towards a sound he characterised as "plastic soul", initially alienating many of his UK devotees but garnering him his first major US crossover success with the number-one single "Fame" and the album Young Americans. In 1976, Bowie starred in the cult film The Man Who Fell to Earth and released Station to Station. The following year, he further confounded musical expectations with the electronic-inflected album Low (1977), the first of three collaborations with Brian Eno that would come to be known as the "Berlin Trilogy". "Heroes" (1977) and Lodger (1979) followed; each album reached the UK top five and received lasting critical praise. After uneven commercial success in the late 1970s, Bowie had UK number ones with the 1980 single "Ashes to Ashes", its parent album Scary Monsters (And Super Creeps), and "Under Pressure", a 1981 collaboration with Queen. He then reached his commercial peak in 1983 with Let's Dance, with its title track topping both UK and US charts. Throughout the 1990s and 2000s, Bowie continued to experiment with musical styles, including industrial and jungle. He also continued acting; his roles included Major Celliers in Merry Christmas, Mr. Lawrence (1983), the Goblin King Jareth in Labyrinth (1986), Pontius Pilate in The Last Temptation of Christ (1988), and Nikola Tesla in The Prestige (2006), among other film and television appearances and cameos. He stopped concert touring after 2004, and his last live performance was at a charity event in 2006. In 2013, Bowie returned from a decade-long recording hiatus with the release of The Next Day. He remained musically active until he died of liver cancer two days after the release of his final album, Blackstar (2016).
Publicado por la musica del segle passat en 12:20 No hay comentarios: